Unlikely Alliance Between Israel and Egypt Against Gaza!

Editor's Note: Sisi's role in the Gaza genocide is even deeper than we previously knew... the monsters were coordinating with him day in and day out.  I have run out of adjectives for how sickening this collaboration is...

The plan was simple: Israel and the new military-led government in Egypt would work together to ratchet up pressure on their shared enemy in the Gaza Strip - Hamas. But their miscalculations triggered a crisis. WSJ's Adam Entous joins the News Hub to discuss.

Israel and Egypt quietly agreed to work in concert to squeeze Hamas after Egypt's military coup in 2013, a strategy that proved effective but which some Israeli and U.S. officials now believe stoked tensions that helped spur open warfare in Gaza.

When former military chief Abdel Fattah Al Sisi rose to power in Egypt after leading the overthrow of Islamist President Mohammed Morsi, Israel found the two countries had a common interest in suppressing the Islamist group that ruled Gaza. They worked to bring pressure on their shared enemy.

But a reconstruction of events leading up to the conflict over the past month found that in their determination to hem in Hamas, Israeli and Egyptian officials ignored warning signs of an impending explosion, U.S., Israeli and U.N. officials said. 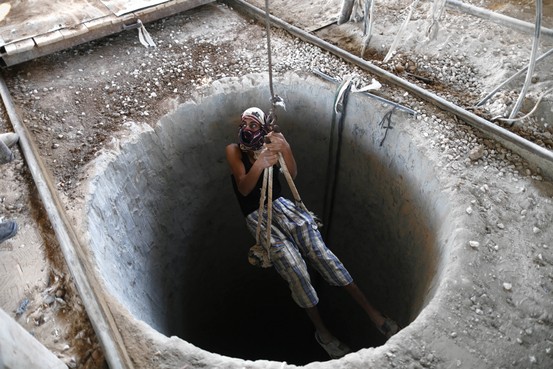 A Palestinian enters a smuggling tunnel beneath the border between Egypt and Gaza in September.Zuma Press

The U.S. encouraged Israel and Egypt to forge a close security partnership. What Washington never anticipated was that the two countries would come to trust each other more than the Americans, who would watch events in Gaza unfold largely from the sidelines as the Israelis and the Egyptians planned out their next steps. (See an hour-by-hour breakdown on cease-fires in Gaza.)

The seeds of the latest Israel-Hamas conflict were sown in 2012, when Hamas broke ranks with longtime allies Syria, Iran and Lebanon's Hezbollah and threw its support behind the rebels fighting to unseat President Bashar al-Assad in Syria's civil war. 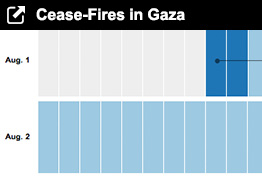 Hamas, which ruled Gaza for the past seven years, came to rely on cash supplied by Qatar transferred through Egypt, with the assent of Mr. Morsi, and on revenue from smuggling goods through tunnels reaching into Egypt. As long as Hamas controlled cross-border attacks, Israel tolerated the Islamist movement at its southern doorstep, Israeli officials said.

That pressure got dialed up when Mr. Morsi was deposed and Mr. Sisi rose to power. Israeli officials knew Egypt was as committed as they were to reining in Hamas when Mr. Sisi sent word earlier this year that his forces had completely destroyed 95% of the tunnels under Egypt's border with Gaza.

At first, Israeli intelligence officials said they didn't know what to make of Mr. Sisi, a devout Muslim who in previous posts treated his Israeli counterparts coldly, a senior Israeli official said. As Mr. Sisi moved to take control of the government, Israeli intelligence analysts pored over his public statements, writings and private musings, Israeli and U.S. officials said.

The Israeli intelligence community's conclusion: Mr. Sisi genuinely believed that he was on a "mission from God" to save the Egyptian state, the senior Israeli official said.

Moreover, as an Egyptian nationalist, he saw Mr. Morsi's Islamist group, the Muslim Brotherhood, and its Palestinian offshoot, Hamas, as threats to the state that needed to be suppressed with a heavy hand, the Israeli official said.

Israeli intelligence analysts interpreted Mr. Sisi's comments about keeping the peace with Israel and ridding Egypt of Islamists as a "personal realization that we—Israel—were on his side," the Israeli official said.

The revelation that Hamas was equally abhorrent to Mr. Sisi as it was to the Israeli government spurred efforts to reward him. Israel used its clout in Washington to lobby the Obama administration and Congress on his behalf, in particular arguing against a U.S. decision to cut off military aid to Egypt, Israeli officials said.

"It came at a very formative time for him" and helped cement a trusting relationship between friends who realized they were vital to each others' national security, he said.

Cooperation with Israel is highly sensitive in Egypt and Egyptian officials declined to discuss in detail the partnership between the neighbors against Hamas.

In Gaza, there was shock at the events unfolding in Cairo.

Under the protective umbrella of Mr. Morsi's Islamist-led government, Hamas had imported large quantities of arms from Libya and Sudan, as well as money to pay the salaries of government officials and members of their armed wing, Israeli and U.S. officials said. His successor abruptly changed that.

"One day we had been sitting having great conversations with Morsi and his government and then suddenly, the door was shut," Ghazi Hamad, Hamas's deputy foreign minister, said in an interview last month.

From having contact at "every level" of the Egyptian government under Mr. Morsi, now Hamas's only contact with Cairo was a military intelligence officer handling the Hamas brief who was more anti-Hamas than the Egyptian leader, U.S. officials said.

But U.S. officials didn't agree with what they saw as Mr. Sisi's "conspiracy theories" about Hamas threatening the Egyptian state. They feared his heavy hand against Islamists in Egypt would drive them underground and might set off a civil war. The criticism only deepened the bond between Mr. Sisi and Israel, U.S. and Israeli officials said.

Egypt secretly coordinated with senior Israeli officials led by Maj. Gen. (Res.) Amos Gilad, the director of the political-military affairs bureau at Israel's Defense Ministry, who is known in the Israeli security establishment as the "granddaddy" of the Israeli-Egyptian channel, Israeli officials said.

Mr. Gilad and other Israeli officials shuttled between Israel and Egypt and spoke to their Egyptian counterparts by phone. Officials said the two sides spoke every day, more often during crises. Although there were disagreements, Mr. Gilad forged a personal relationship with the Egyptian leader, officials said. 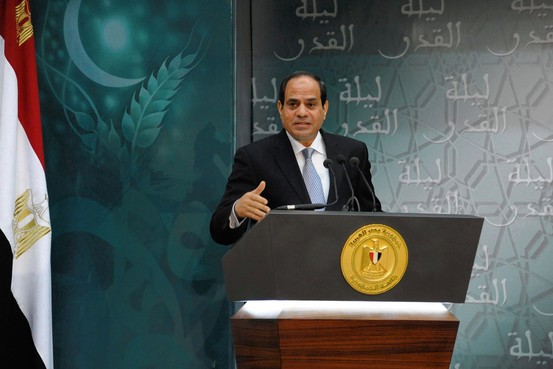 A senior Israeli official said the two governments wanted to advance their shared interests and increase pressure on Hamas. But he insisted there was no master plan to squeeze it to the point that "something would explode."

Yet when Mr. Sisi closed nearly all of the tunnels along Egypt's border with Gaza but didn't compensate for the loss of those avenues by allowing the passage above ground of needed supplies, some Israeli officials said they privately began to raise alarm bells about the severity of Cairo's decisions.

"They actually were suffocating Gaza too much," one Israeli official said.

In Gaza, the situation grew desperate.

At the start of the year, Hamas realized that Egypt's campaign to destroy the tunnels was edging it toward bankruptcy.

In April, Hamas abruptly agreed to form a government of technocrats under Western-backed Palestinian Authority President Mahmoud Abbas, reconciling with the group that governed the West Bank after years of rivalry.

The growing dangers about Hamas's precarious position were flagged to Washington by the U.S. Consul General in Jerusalem, Michael Ratney. He saw the pressures building in the spring and concluded that Hamas was in desperate straits, unable to pay salaries to its 40,000 government workers in Gaza, and was now reaching out to the Palestinian Authority to try to relieve the pressure.

Mahmoud Zahar, a top Hamas leader in Gaza, said the group's inability to cover its monthly payroll forced it to reach out to the Palestinian Authority and Qatar, which pledged $60 million for three months. But U.S. and Israeli officials said Arab banks wouldn't make the transfer.

At the height of Hamas's distress, three Israeli teenagers were kidnapped in the West Bank in June and subsequently found dead. Israel quickly concluded that Hamas was responsible and rounded up its activists in the West Bank, infuriating the group's armed wing in Gaza.

After the abduction, which U.S. officials believe was carried out by Hamas members without the approval of their leaders in Gaza, Israeli intelligence officials warned policy makers that "overly pressuring Hamas will lead to a conflagration," according to another senior Israeli official.

Palestinian officials told diplomats they were making a last-ditch effort to get the money for salaries to Gaza, believing that doing so might help defuse tensions but nothing came of it, diplomats said.

Rocket fire from Gaza escalated, and Israel began to respond with airstrikes.

U.S. officials, who tried to intervene in the initial days after the conflict broke out on July 8 to try to find a negotiated solution, soon realized that Mr. Netanyahu's office wanted to run the show with Egypt and to keep the Americans at a distance, according to U.S., European and Israeli officials.

The Americans, in turn, felt betrayed by what they saw as a series of "mean spirited" leaks, which they interpreted as a message from Mr. Netanyahu that U.S. involvement was neither welcomed nor needed.

Reflecting Egypt's importance, Mr. Gilad and other officials took Mr. Sisi's "temperature" every day during the war to make sure he was comfortable with the military operation as it intensified. Israeli officials knew television pictures of dead Palestinians would at some point bring Cairo to urge Israel to stop.

"We knew we could not do something that went beyond what they could digest," a senior Israeli official said of the Egyptians. Egypt's view mattered more than America's, Israeli officials said.

When a tentative deal finally came together in Cairo to stop the fighting, Washington found itself outside looking in on the Israeli-Egyptian partnership once again.

The Obama administration knew from Palestinian contacts earlier this week that representatives of Israel, Egypt and the Palestinians were working on a new cease-fire proposal but didn't know details because they were left largely out of the discussions. (Compare cease-fires proposed and broken since the most recent conflict began in Gaza.)

Key American officials said they first heard about the breakthrough from Twitter and the media, rather than from their Israeli or Egyptian counterparts.