Deprecated: Array and string offset access syntax with curly braces is deprecated in /home/lybs0cinwsl2/public_html/att/libraries/vendor/joomla/string/src/phputf8/utils/validation.php on line 40
 A Zionist Egypt has emerged under Al-Sisi!


A Zionist Egypt has emerged under Al-Sisi!

Editor's Note: I was appalled and shocked to see that 96.1% of Egyptians voted for that Jewish-Zionist thug Al-Sisi. I also was extremely perturbed when talking to Egyptian friends who I thought were conscious and aware and to see that they too were fooled into voting for Al-Sisi. It seems like Arabs have bad leaders imposed on them as well as eagerly choose to accept these hypocrites and demonic rulers. It is not that they weren't warned about Al-Sisi and his being fully in the pocket of the US and Israel. They were and they chose to ignore the warning.  Are the Arab people cursed to always have bad leadership over them? It seems so because they never learn and constantly repeat the same mistakes. 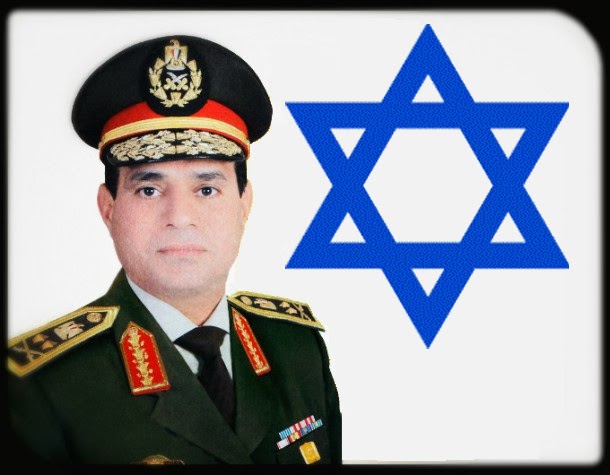 It was once the heart of the Arab world, playing a central role in Middle Eastern politics. The largest Arab country, populated by 86 million people, and with a record of being at the forefront in playing the role of mediator in conflicts within the region, particularly those relating to Palestine. In Egypt today, there is little of the traditional Arab solidarity towards Palestinians to be found; there is, though, the emergence of anti-Hamas, anti-Palestinian sentiments among Egyptians.

The Gaza Strip, whose almost 2 million people live in less than 360 square kilometres, affects Egypt, but is affected more by the internal affairs of its mighty neighbour. This is primarily due to the fact that Gaza's leadership, Hamas, is part of the Muslim Brotherhood, an organisation which was overthrown in Cairo by a bloody coup one year ago.

Whilst struggling under a siege which has been imposed by Israel and Egypt, Gaza is now also being attacked by the world's fourth largest army, the so-called Israel Defence Forces; Cairo remains silent. Gaza has experienced different relationships with Egypt over the past four years, from absolute hostility, to neutrality, to absolute support. Currently, the besieged land gets no help from the government in Cairo; it gets only unequivocal hostility.

It was in Cairo in 2008 that Israel's Tzipi Livni announced the start of "Operation Cast Lead" against Gaza, one year after the siege was put in place, helped by the Mubarak regime.

When the 25 January Revolution came along in 2011, Mubarak's regime claimed that it was Hamas which was responsible for killing protesters in Tahrir Square. Following Mubarak's overthrow, things took a turn for the better under the interim SCAF (Supreme Council of the Armed Forces) government; the blockade on Gaza was eased, with the Rafah crossing, the only border not controlled by Israel, allowing Palestinian women, children and men aged over 40 to pass into Egypt.

After the first post-revolution elections, Egypt had its first democratically-elected civilian president, Dr Mohamed Morsi, a candidate for the Muslim Brotherhood. He supported Hamas.

When Israel launched its attack on Gaza in November 2012 – "Operation Pillar of Defence" – Egypt gave Gaza it's full support. Prime Minister Dr Hisham Qandeel went to visit Gaza during the onslaught. Egypt also managed to broker a ceasefire and truce between the Israelis and Palestinians which ended the offensive.

Following the military coup in July 2013, and in the footsteps of Mubarak's regime, Egypt went back to having a completely hostile attitude towards Gaza, at an unprecedented level. It closed the Rafah crossing once again and destroyed the tunnels which were considered a life-line for the Palestinians in the Strip.

With the current heinous Israeli military offensive on Gaza which has claimed the lives of over 740 Palestinians to-date, with more than 5,000 injured (the figures are rising by the minute), Egypt is playing the role of spectator and refers to the offensive as an exchange of fire by both sides. Al-Sisi's government ignores the fact that Israel's army is attacking a densely populated strip of land whose people possess no army, navy or air force. In the new Egypt, the aggressor and the victim are the same, equating the Palestinian resistance and Israel. This is a position that not even Mubarak took.

Whilst the children of Gaza are bidding farewell to their childhood and their lives, and homes are obliterated and entire families annihilated, the Arab world is silent. Even Gaza's closest, once intimate, neighbour; the neighbour that was always looked to for comfort and support, if not from its leaders, then at least from its people, has made no condemnation of Israeli brutality.

The incitement of hatred in Egypt against the Muslim Brotherhood since Morsi was elected led to the bloody coup and the largest massacre seen in Egypt against his supporters. This has been redirected over the past year against Hamas on a governmental, military, judicial and media level.

"The support for Palestinians has waned dramatically," said one Egyptian journalist. "The Egyptian silence in the face of Israel's latest offensive is expected amid an unprecedented and coordinated media smear campaign against Hamas."

The emergence of Egyptian Zionists

The dehumanisation and gloating seen amongst the Egyptian people when peaceful anti-coup protesters were annihilated, is the same now being witnessed towards Gaza, with several television presenters praising and supporting the Israeli military operation against Hamas. Some salute Israel and encourages it to wipe out Hamas and the people of Gaza.

"Thank you Netanyahu and may God give us more people like you to destroy Hamas!" tweeted Azza Sami of the Egyptian newspaper Al-Ahram. Another Egyptian wrote: "May God make the State of Israel victorious in its war against the terrorist movement Hamas during this holy month of Ramadan."

Hamas and the Palestinians are shocked by this reaction to the Israeli military operation. One Hamas spokesman said: "It's disgraceful to see that some Egyptians are publicly supporting the Israeli aggression on the Gaza Strip while Westerners are expressing solidarity with the Palestinians and condemning Israel." Since the Israeli offensive, there has been an immense worldwide public uproar with many countries seeing tens of thousands of people protesting in the streets to condemn the atrocities and call on their governments to put pressure on Israel to stop its crimes.

This sort of incitement towards Palestinians has never been seen before in Egypt; some of the state mouthpieces go so far as to claim, ridiculously, that what is happening is not a war, but an agreement between Israel and Hamas to embarrass Egypt. According to presenter and staunch mouthpiece of the Al-Sisi regime, Tawfik Okasha, "Hamas has made an agreement with Israeli intelligence and planned for the firing of Hamas rockets into Tel Aviv." Another, obviously ignorant, TV personality claimed that the people of Gaza were better off under the Israeli occupation than under the Hamas-led government.

In May during his presidential campaign, Al-Sisi said that should any Arab nation be threatened in its national security, then Egypt would be there straight away and that Egypt will "not accept any threat to any Arab country." Gaza appears to be exempt from this promise. Not only is the onslaught against Gaza taking place with the blessing of the new coup government in Egypt, but it has also been co-ordinating with Israel in Sinai to destroy the tunnels and close the Rafah crossing.

Wounded Palestinians have been refused entry, and convoys carrying much-needed medical aid have been turned away, strengthening the siege on this open-air prison and putting more pressure on Hamas on behalf of Israel. Atallah Eid, a 24 year old Palestinian who managed to make it through Rafah was among the very few wounded allowed to do so. "I was so happy when I was told that I was going to Egypt to complete my treatment, but what I heard with my ears and saw with my own eyes made me wish I had died in Gaza and never come to Egypt," he said.

Another injured Palestinian said that he wants to return to Gaza as soon as possible. "I don't want to finish the treatment. I wish they didn't bring me to Egypt... Its image would've stayed rosy in my eyes."

Israel has not publically admitted its alliance with Egypt over its operation against Gaza. However, Israeli journalist and political analyst Danny Rubenstein, speaking on Al-Jazeera, admitted that there is some kind of understanding between the two countries on the Gaza onslaught agenda and that both have mutual interests in attacking Hamas.

Operation Protective Edge was the first test for Al-Sisi on foreign affairs since officially taking the presidency, and he has failed miserably. While the attack on neighbouring Gaza was making headlines worldwide, Al-Sisi failed to mention anything in the speech he made to the Egyptians on 10 Ramadan, corresponding to the second day of the onslaught. The Rafah border has remained largely closed in the face of the wounded and injured Palestinians, and not a word of condemnation has been made by the president of the largest country of the Arab world. If Egypt was once known as the "mother of the world", this mother seems to have disowned its closest child as the killings next door continue unabated.

Loyalty from behind bars

In a country where over 1,000 of its own people were massacred in one day - shot, beaten, burnt and gassed - and the perpetrators were praised and saluted, it doesn't seem so surprising that the same people would allow more massacres to occur in a neighbouring country.

Without doubt there are still many Egyptians and Arabs who sympathise with Gaza and are outraged. Indeed Egypt has seen many protests under banners proclaiming, "To you we come Gaza!" though they do not receive airtime and the calls for Gaza are drowned by the new Egyptian Zionist voices.