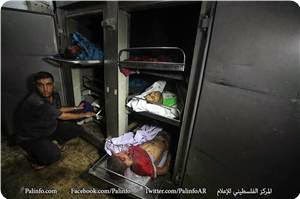 GAZA, (PIC)– The Palestinian health ministry said the Israeli army uses internationally-banned weapons in its military aggression against the population in the besieged Gaza Strip, urging all concerned organizations to visit the Strip and document Israel’s war crimes.
Deputy health minister Yousuf Abul-Rish told a news conference on Sunday that the medical staff in Gaza hospitals found deep lacerations in the bodies of victims that can only be caused by unconventional lethal weapons.
Abul-Rish stated that Israel used warships, warplanes and artillery guns that are only used against other large armies to kill children, women and unarmed civilians in Gaza, which caused major physical disabilities to scores of victims.
He stressed that the use of such banned weapons against humans is a flagrant violation of the international law, especially the fourth Geneva convention.
For his part, Norwegian doctor Mads Gilbert said that he examined most of the bodies of the wounded and killed civilians who arrived at Al-Shifa hospital during the past few days and found out that they suffered very severe injuries resulting from conventional and unconventional lethal weapons.
Gilbert noted that the injuries he had examined were caused by projectiles intended to inflict large physical damage to different areas of a human body.
He added that he would start in the coming days to reexamine the bodies of victims to make a more accurate report about this matter.

Israel’s Weapons: A Crime on Humanity

In an article of March 4, Richard Lightbown argues that Israel’s use of depleted uranium, white phosphorus and other toxic metals in its war on the people of the Gaza Strip has put the whole of the Strip’s population and its environment – air, soil, groundwater and possibly seawater – at risk of serious long-term injury and contamination.

Effects of White Phosphorus – Click to enlarge
Press TV on 4 March 2011 reported that cancer cases in Gaza had increased by 30 per cent, and that there was a link between the occurrence of the disease and residence in areas that had been badly hit by Israeli bombing. Zekra Ajour from the Al-Dameer Association for Human Rights told the channel that Gaza had been a testing ground for illegal weapons.

On 20 December 2009 Al-Dameer had published another paper in Arabic on the increase in the number of babies born in Gaza with birth defects, thought to be the result of radioactive and toxic materials from Operation Cast Lead.1 The birth defects included incomplete hearts and malformations of the brain.During August, September and October 2008 the number of cases had been 27. In the comparable months in 2009 the numbers had risen to 47. There was a similar rise in aborted foetuses. Al-Dameer had called for scientific monitoring throughout the Gaza Strip to obtain statistics on deformed foetus cases relating to the intentional use of internationally banned weapons.
Similar dramatic increases in birth defects over a longer period have been recorded in Iraq and have been linked to widespread use of depleted uranium (DU) weapons. (It is reported that local midwives no longer look forward to births as they don’t know what is going to come out.)

Although the epidemiologist Professor Alastair Hay told the BBC in March 2010 that it was difficult to suggest any particular cause for the trend,2 scientific data has been published which contradicts his opinion. A review in Environmental Health in 20053 concluded by saying:

Regarding the teratogenicity of parental prenatal exposure to DU aerosols, the evidence, albeit imperfect, indicates a high probability of substantial risk. Good science indicates that depleted uranium weapons should not be manufactured or exploded.

When later asked in the same interview about white phosphorus, Prof. Hay had replied;

…phosphorus is an essential element in our bodies and so you would I think have to ingest a huge amount to cause any particular problem. But there has been no investigation anywhere that I am aware of to link phosphorus with health problems…

Apparently the professor has not read the Goldstone Report of the previous year which states in paragraph 896:

Medical staff reported to the mission how even working in the areas where the phosphorus had been used made them feel sick, their lips would swell and they would become extremely thirsty and nauseous.

The toxicity of phosphorus is also recorded in a report by New York medical staff:4

The United Nations Environment Programme (UNEP) reported that breathing white phosphorus for long periods causes “phossy jaw”, a condition in which there is poor wound healing of the mouth and breakdown of the jawbone.5