The Judaic Foundations Of The Muslim Brotherhood

All papers are reporting the likely decision of President Trump to blacklist the Muslim Brotherhood as a terror group. The WSJ even warns that doing so carries great risks and could trigger unexpected consequences.

But is Trump considering such action because he understands the true nature of the beast? Or is it because of his primitive and very basic understanding of anything Islamic/Oriental? Or is it to reassure ‘white America’ who has put him in the White House precisely on his Islamophobic campaign promises?

The ‘Muslim’ Brotherhood is one of the most powerful scarecrow used against the ‘Christian’ West to justify the need for a ‘judeo-Christian’ alliance in what they hope will be an inevitable clash of civilization.

The name – Muslim Brotherhood – was carefully chosen. There is something mysterious and scary about it. The name they chose is meant to instill an instinctive fear and immediate distrust into western psyche. That is the goal.

But what is the ‘Muslim Brotherhood’ which all the western intelligence services have been allied to since it was created?

It was officially born in 1928; its official founder is Hassan al Banna and it has been directly linked to wahhabism and to the British intelligence services since its inception.

Hassan al Banna is the man who fused together Free Masonry and wahhabism into one movement, known as ‘The Muslim Brotherhood’.

Who is Hassan al Banna?

Hassan al Banna did not emerge in an intellectual vacuum but comes in a long line of ‘reformers’, subverters whose openly stated mission was to destroy Islam from within. Their aim was and still is to reform Islam, to make it judaism-friendly and, when the time comes, compatible with the Noahide Laws.

Hassan al Banna’s name always comes up when discussing the brotherhood, but his mentors, his spiritual fathers are always kept in the dark.

And yet, one can not understand al Banna without knowing his mentors. And once we know who his teachers were, we understand straight way what the agenda of these men are, we recognize straight away the judaic essence of the Brotherhood.

Muhhammad ibn Adbdul Wahhab was called a heretic, a false prophet, a deceiver etc. The only man who believed in him was a bare footed Bedouin of eastern Arabia: the head of the Saud tribe. Together they went on to brutally murder anyone who disagreed with them. The savagery and butchery which they displayed against the Muslims (Shia and Sunni alike) is exactly the same displayed by the jewhadists of ISIS today.

The Ottomans sent in their military to crush them and they could have very well succeeded had Britain not intervened in favour of the Saudi-Wahhabi alliance as a mean to destabilize the Ottoman Empire.

Sheikh Imran Hosein labels it as ‘Protestant Islam’. We can go further and call it ‘Puritan Islam’ because the similarities between Cromwell’s Puritans and the Wahhabis are too numerous and too striking to be a coincidence. In particular the wars they had waged against their own co-religionist. In both cases, they zealously applied to the letter the ‘art’ of war as laid down in the Book of Joshua. Their wars were jewish inspired wars of extermination against the enemies of the jews: Catholics (Cromwell) and Muslims (Ibn Saud).

But wahhabism was a ‘religion’ created by a Bedouin for Bedouins; its primitive, judaic doctrines lacked any sophistication and failed to take root in any cities of the Levant.

And so new ‘ideology’ emerged with the blessings and financing of Britain who was still assisting the Saudi-Wahhabi takeover of Arabia as she prepared to takeover the entire Middle East.

The new ideology they came up with had the same goal as wahhabism but had a different make-up and was specifically tailor- made for the city-people: Islamic Reformism. 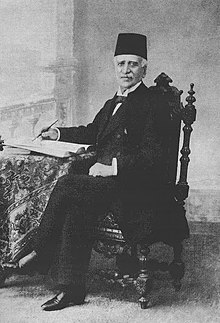 The first main reformer was an Armenian Christian, allegedly converted to Shia Islam: Malkum Khan (1833-1908). His goal was to transform Shia Islam so that it can be blended into the greater religion of Mankind, a religion he calls “the religion of Human Rights”’. He openly formulated his methods of using Religion against itself until it adapts and submits to ‘modernity’.

Malkum Khan was initiated to free masonry in Paris and then founded the very first masonic lodge of Persia in 1858. He was so successful in his destructive mission that the Persian government banned free masonry and forced him into exile.

Al Afghani was not from Afghanistan but also from Persia. His mission was to reform Sunni Islam with the same purpose as Malkum Khan.

His correspondence with Ernest Renan reveals an incredibly deep hatred for Islam and it baffles the mind that such a man can still be called ‘Muslim’. He was an enemy of Islam, never hid it and should be therefore treated as such.

Also a Freemason, he left us with an earth shattering statement which should leave no doubt on the purpose of the ‘Muslim Brotherhood’: “We shall cut off the head of Religion (Islam) using the sword of Religion”.

Incredibly enough and again, with the blessings and financing of Britain, this man became the Grand Mufti of Egypt in 1899.

He started to popularize the wahhabi doctrine in Egypt by changing the curriculum of Al Azhar university in Cairo. This was a huge step forward which was then taken even further by his student, Rashid Ridha (1865-1935).

And Hassan al Banna, the founder of the Muslim Brotherhood was a student of Rashid Ridha. 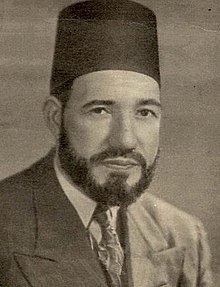 Al Banna made free masonry ‘kosher’ by giving it an ‘islamic’ shroud, by pretending to fight the British occupation, by pretending to want to revive Islam when in fact their goal was and still is the destruction of Islam from within to prepare the grounds for the long-awaited Vatican II of Islam.

Their work continues today from Qatar with the The Research Center for Islamic Legislation and Ethics, which is headed by Tariq Ramadan… the grand-son of Hassan al Banna.

Another prominent modern figure of the Brotherhood is Yusuf al Qaradawi, also based in Doha.

This man is mainly known for publicly declaring that the war against Assad was kosher. He openly supported the liver-eating, head-chopping jewhadists. He called for the killing of all Muslims who supported Syria be they man, woman or child, be they clerics, soldiers, students etc.

But there is a darker side to this man, a darker side which his ex-wife, an Algerian lady, revealed: she claims that he is a Jew, a Mossad operative, someone who speaks Hebrew fluently, who travels to Israel back and forth etc.

I first dismissed these claims until I heard the speech he made in Tahrir Square after the Mubarak regime fell: “Next year in Jerusalem” was his conclusion.

For those who know not, they will understand this for what it says.

But ‘Next year in Jerusalem’ is not an innocent sentence – it is part of jewish liturgy, it is the prayer that the jews have been saying since the XIIIth century, to this very day.

Could this have been his message to the tribe, message which only the ‘initiates’ could understand? I now believe so.

Coming back to Donald Trump, I hope he plans to take on the M.B because he understands the dark agenda that this judaic organization has for the Muslims and the world at large.

Just like I hope that it is wahhabism he intends to fight when he vows to eradicate ‘radical Islam’.

But I am not so sure.