Zimmerman does NOT represent all Jews! 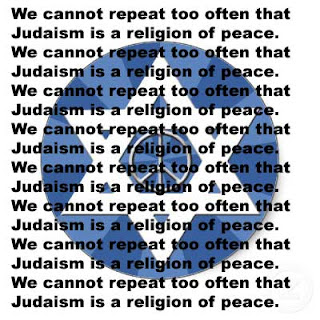 In the wake of the horrific murder of 17-year-old Trayvon Martin by Jewish terrorist George Zimmerman, it is critically important that we all recognize that not every Jew is a cold-blooded murderous terrorist like Zimmerman. We cannot repeat too often that Judaism is a religion of peace. Yes, there are a small number of Jewish extremists out there who support child-murdering terrorist organizations like the State of Israel; who shoot innocent black kids down in cold blood; who call for the murder of the President of the United States; and so on and so forth. But most Jews are law-abiding citizens, not terrorists - even though parts of their Talmud do exhibit a vastly greater reverence for Jewish life than for non-Jewish life - and we must always remember that, and say it over and over so that everyone knows that we have to say it over and over because if we didn't, who knows? maybe the public would start associating the word "Jew" with the word "terrorist" and we wouldn't want that, would we? Let's see how awful that sounds: "Jew...terrorist. Jew....terrorist." Repeat that a hundred times. Finished? Great! Now you know that hearing and speaking the word "Jew" next to the word "terrorist" over and over, and being inundated by mainstream news stories that focus on the Jewishness of every perpetrator of violence who happens to be Jewish, doesn't necessarily influence the public to take a negative view of Jewishness, does it?

But even though most Jews are NOT terrorists - despite the actions of that small, radical minority - we do have to face up to the terrorism problem. It is a fact that Jews commit more than their share of terrorism - according to FBI statistics, more terrorist acts are committed by extremist Jews than by extremist Muslims, and Jews commit terrorism at a rate more than three times that of the general population. People who regularly visit terrorist propaganda websites that encourage or excuse the actions of the world's worst terrorist groups, the IDF and the Zionist-co-opted US military - websites like Fox News and the Jerusalem Post and even the New York Times and The Washington Post - need to be pre-emptively incarcerated. And the New York Police Department obviously needs to continue its massive program of spying on that city's extremely dangerous, mobbed-up Jewish community, in hopes of capturing or killing 9/11 terrorist poster-boy Osama Bin Silverstein.

Meanwhile, over in France, it's funny how nobody has even noticed the fact that the lone-nut gunman over there was a Muslim. Why won't the media report that? The answer is obvious: Muslims control the media, and they make sure that every time a Jew commits an atrocity we know it was a Jew...but when someone from a Muslim background does it, nobody is allowed to know what his background is. What a horrible, Judeophobic double-standard.

Anyway, please repeat after me: Judaism is a religion of peace, despite everything we see and hear every day in the newspapers and on TV. Not all Jews are terrorists, even though it seems that way because of the way the media focuses on the Jewishness of every Jewish malefactor. In our 100-year-war against Jewish terrorism, we must not condemn the entire Jewish community for the actions of the small minority of IDF-supporting extremists.

There. Our liberal, bigotry-free credentials have been established.

Maybe Abe Foxman will give us an award.

This just in: It turns out that Zimmerman isn't Jewish, he's Catholic.

But since the corporate media keeps referring to the alleged 9/11 hijackers as "Muslims," even though those operating under the 19 stolen identities prior to 9/11 were obviously not Muslims, we might as well follow their example and continue to deceive the public.