Pardon me as I make a dua for the Syrian army defending Syria’s sovereignty in the middle of a crisis/And to the opposition you are not Resistance you are mocking it with your treacherous words and belittling the righteous/You should be despising yourselves, aligning yourselves with Israel, NATO and their puppet oil and gas regimes/Plot is 30 years old but Syria will crush and foil your drastic scheme/Birthed with the Brotherhood insurgency in seventy six/Ended in eighty-two, Hafez al-Assad wasn’t murdered and the enemies flipped/In light of this reality, Israeli foreign policy advisor Oded Yinon composed a strategy to break the nation apart/Transform it into weakened and demolished states for Israel to confiscate, dominate and keep the people strafed and facing the dark/Updated in ‘96 as “Clean Break” by Zionist criminals Perle and Feith/Said that Turkey and Jordan would be key to the rollback, a cold trap to set this miserable world alight/Finalized with stooges Bush and Obama, ain’t a revolution, they are lying to you steadily/Arab Spring coined by Charles Krauthammer, neocon cancer and international PSYOP to further Zionist hegemony/

Not a revolution, this is destabilization
You call it uprising, I call it death of a nation
I call you liars, clowns of the devil
Long live Syria, down with the rebels

Burning churches and murdered journalists, this is Western-backed classic democracy/ Houla and Tremseh, Hama and Homs, Zionist media frenzy over manufactured atrocities/ Christians to Beirut, death to the Shi3a, 3alawi to the coffins/Chanted by these sectarian thugs, granted they are bankrolled by Houses of Saud and Thani, specialize in murder, robbery and extortion/Torture and car bombs, terror’s the game/Assef Shawkat assassinated, weapons line to Hezbollah severed by Mossad is the devilish Jewish supremacist aim/Regime changed, replaced with Wahhabi ingrates subservient to the Gulf/Imprisoning women because their definition of Hijab isn’t sufficient, killing men because their beard length isn’t a Sunnah derivative, they are merciless and a cult/ Kidnaping pilgrims, throwing postal workers from buildings, making human shields out of civilians, war crimes galore/Lieberman and McCain, evil and just deranged, they want a new Syria where all die in gore/Danny Ayalon bragging blatant of fragmentation with no way to mend the sorrow/Unless Syria surrendered to Zionism, then this bullshit ‘revolution’ would end tomorrow/

British and German intelligence aiding the rebels to keep the Syrian army’s communications disheveled and so the country hurts and burns better/Israel and America directing operations from a Turkish nerve center/Bahrain, Kuwait and House of Nahyan continue to move numbers/And Erdogan, nasty hypocrite, waste of a human life, Zionist blue and white are really your true colors/Same goes for the Saudi king, the way the Israelis make you sing is pitiful/CIA is giving the rats guns and stinger missiles too/ Horowitz and Wolf’s anti-Beijing cyber warfare passed to activist proxies/Spreading lies through encrypted usernames while the rebels terrorize with brutal pain and stack up the bodies/Syrian Observatory covers it up, a one-man band in Coventry with illustrious funds from the energy tyrants/Amnesty International and Human Rights Watch, Zionist-funded fronts that whitewash the enemy’s violence/Zionist World Order emerging with mass panic, famine and the sickness/Israel will rule if we do not stand with the Resistance/So long live Syria, Long live Syria, and may ALLAH damn the rebels, and dismantle their existence/ 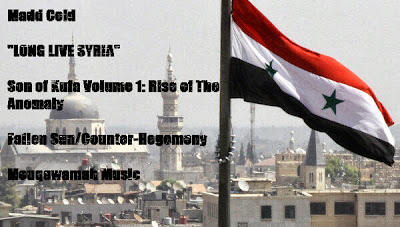