Exclusive: As the Obama administration is rushing to complete a nuclear agreement with Iran and reduce regional tensions, the Israeli media is reporting on a deal with Saudi Arabia to let Israeli warplanes transit Saudi airspace en route to bombing Iran, reports Robert Parry.

According to an Israeli media report, Saudi Arabia has agreed to let Israeli warplanes fly over Saudi territory to save fuel while attacking Iranian nuclear sites, the latest indication of how the two former enemies have developed a behind-the-scenes alliance that is reshaping geopolitics in the Middle East.

“The Saudi authorities are completely coordinated with Israel on all matters related to Iran,” a European official in Brussels told Israel’s Channel 2 in a report broadcast on Tuesday and described in other Israeli media outlets. 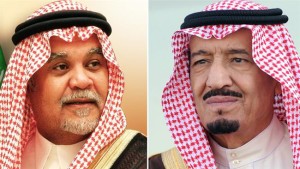 Riyadh’s only condition was that Israel make some progress in peace talks with the Palestinians, a stipulation that may be mostly cosmetic so the Saudis can save face with other Arab states without really interfering with an Israeli flyover to strike Iran.

Disclosure of this Israeli-Saudi military cooperation comes as the United States and five other world powers rush to finish an agreement with Iran to curtail but not eliminate its nuclear program, which Iran says is only for civilian purposes. Israeli Prime Minister Benjamin Netanyahu is set to appear before the U.S. Congress on March 3 to undercut President Barack Obama’s negotiations.

The reported Saudi permission for Israeli warplanes to take a shorter route to bomb Iran also suggests that Netanyahu may be laying the groundwork for his own plans to attack the Iranian nuclear sites if the international negotiations are successful. Netanyahu has denounced a possible deal as an “existential threat” to Israel.

In recent years, Israel and Saudi Arabia have quietly begun cooperating on a range of mutual interests with the goal of blunting Iran’s regional influence. For instance, they have sided with rebels fighting to overthrow Syrian President Bashar al-Assad, an Iranian ally, even if the victors might be Islamist radicals affiliated with al-Qaeda or the Islamic State.

Elements of the Saudi royal family have long been known to support Islamist militants, including forces associated with al-Qaeda leader Osama bin Laden. Earlier this month, the New York Times reported that convicted al-Qaeda operative Zacarias Moussaoui identified leading members of the Saudi government as financiers of the terrorist network.

According to the story, Moussaoui said in a prison deposition that he was directed in 1998 or 1999 by Qaeda leaders in Afghanistan to create a digital database of the group’s donors and that the list included Prince Turki al-Faisal, then Saudi intelligence chief; Prince Bandar bin Sultan, longtime Saudi ambassador to the United States; Prince al-Waleed bin Talal, a prominent billionaire investor; and many leading clerics.

“Sheikh Osama wanted to keep a record who give money,” Moussaoui said in imperfect English — “who is to be listened to or who contributed to the jihad.” Moussaoui also said he discussed a plan to shoot down President George W. Bush’s Air Force One with a Stinger missile with a staff member at the Saudi Embassy in Washington, at a time when Bandar was the ambassador to the United States and considered so close to the Bush family that his nickname was “Bandar Bush.”

Moussaoui claimed, too, that he passed letters between Osama bin Laden and then Crown Prince Salman, who recently became king upon the death of his brother King Abdullah.

While the Saudi government denied Moussaoui’s accusations, Saudi and other Persian Gulf oil sheikdoms have been identified in recent years as financial backers of Sunni militants fighting in Syria to overthrow Assad’s largely secular regime, with al-Qaeda’s Nusra Front the major rebel force benefiting from this support.

The Israelis also have found themselves on the side of these Sunni militants in Syria because the Israelis share the Saudi view that Iran and the so-called “Shiite crescent” – reaching from Tehran to Beirut – is the greatest threat to their interests.

In September 2013, Israel’s Ambassador to the United States Michael Oren, then a close Netanyahu adviser, told the Jerusalem Post that Israel favored the Sunni extremists over Assad. “The greatest danger to Israel is by the strategic arc that extends from Tehran, to Damascus to Beirut. And we saw the Assad regime as the keystone in that arc,” Oren told the Jerusalem Post in an interview.

In June 2014, speaking as a former ambassador at an Aspen Institute conference, Oren expanded on his position,

Israel would even prefer a victory by the brutal Islamic State over continuation of the Iranian-backed Assad in Syria. “From Israel’s perspective, if there’s got to be an evil that’s got to prevail, let the Sunni evil prevail,” Oren said.

That hostility toward Assad’s regime has taken a tactical form with Israeli forces launching attacks inside Syria that benefit Nusra Front. For instance, on Jan. 18, 2015, Israel attacked Lebanese-Iranian advisers assisting Assad’s government in Syria, killing several members of Hezbollah and an Iranian general. These military advisers were engaged in operations against Nusra Front.

Meanwhile, Israel has refrained from attacking Nusra militants who have seized Syrian territory near the Israeli-occupied Golan Heights. One source familiar with U.S. intelligence information on Syria told me that Israel has a “non-aggression pact” with Nusra forces, who have even received medical treatment at Israeli hospitals.

Israel and Saudi Arabia have found themselves on the same side in other regional struggles, including support for the military’s ouster of the elected Muslim Brotherhood government in Egypt, but most importantly they have joined forces in their hostility toward Shiite-ruled Iran.

I first reported on the growing relationship between Israel and Saudi Arabia in August 2013 in an article entitled “The Saudi-Israeli Superpower,” noting that the complementary strengths of the two countries made their alliance a potentially powerful influence in the world. Israel could wield political and media clout while the Saudis could use their oil, money and investments.

At the time, the story was met with much skepticism, but, increasingly, the secret alliance has gone public. On Oct. 1, 2013, Israeli Prime Minister Netanyahu hinted at it in his United Nations General Assembly speech, which was largely devoted to excoriating Iran over its nuclear program and threatening a unilateral Israeli military strike.

Amid the bellicosity, Netanyahu dropped in a largely missed clue about the evolving power relationships in the Middle East, saying: “The dangers of a nuclear-armed Iran and the emergence of other threats in our region have led many of our Arab neighbors to recognize, finally recognize, that Israel is not their enemy. And this affords us the opportunity to overcome the historic animosities and build new relationships, new friendships, new hopes.”

The next day, Israel’s Channel 2 TV news reported that senior Israeli security officials had met with a high-level Gulf state counterpart in Jerusalem, believed to be Prince Bandar, the former Saudi ambassador to the United States who was then head of Saudi intelligence.

The reality of this unlikely alliance has now even reached the mainstream U.S. media. For instance, Time magazine correspondent Joe Klein described the new coziness in an article in the Jan. 19, 2015 issue.

He wrote: “On May 26, 2014, an unprecedented public conversation took place in Brussels. Two former high-ranking spymasters of Israel and Saudi Arabia – Amos Yadlin and Prince Turki al-Faisal – sat together for more than an hour, talking regional politics in a conversation moderated by the Washington Post’s David Ignatius.

“They disagreed on some things, like the exact nature of an Israel-Palestine peace settlement, and agreed on others: the severity of the Iranian nuclear threat, the need to support the new military government in Egypt, the demand for concerted international action in Syria. The most striking statement came from Prince Turki. He said the Arabs had ‘crossed the Rubicon’ and ‘don’t want to fight Israel anymore.’”

Israel and Saudi Arabia also have collaborated in efforts to put the squeeze on Russia’s President Vladimir Putin, who is deemed a key supporter of both Iran and Syria. The Saudis have used their power over oil production to drive down prices and hurt Russia’s economy, while U.S. neoconservatives – who share Israel’s geopolitical world view – were at the forefront of the coup that ousted Ukraine’s pro-Russian President Viktor Yanukovych a year ago.

Saudi hostility toward Russia also surfaced in 2013 when Bandar met Putin and delivered what Putin viewed as a crude threat to unleash Chechen terrorists against the Sochi Winter Olympics if Putin did not reduce his support for the Syrian government.

According to a leaked diplomatic account of a July 31, 2013 meeting in Moscow, Bandar informed Putin that Saudi Arabia had strong influence over Chechen extremists who had carried out numerous terrorist attacks against Russian targets and who had since deployed to join the fight against the Assad regime in Syria.

As Bandar called for a Russian shift toward the Saudi position on Syria, he reportedly offered guarantees of protection from Chechen terror attacks on the Olympics. “I can give you a guarantee to protect the Winter Olympics in the city of Sochi on the Black Sea next year,” Bandar reportedly said. “The Chechen groups that threaten the security of the games are controlled by us.”

Putin responded, “We know that you have supported the Chechen terrorist groups for a decade. And that support, which you have frankly talked about just now, is completely incompatible with the common objectives of fighting global terrorism.”

Bandar’s Mafia-like threat toward the Sochi games – a version of “nice Olympics you got here, it’d be a shame if something terrible happened to it” – failed to intimidate Putin, who continued to support Assad. But Putin became obsessed with security at Sochi, distracting him from the worsening crisis in Ukraine where Yanukovych was ousted in a neocon-orchestrated coup on Feb. 22, 2014, a day before the Olympic torch was extinguished.

Now, with Obama nearing a possible agreement to rein in but not end Iran’s nuclear program – against the wishes of the Israeli-Saudi tag team – the leak in the Israeli media suggests that Netanyahu with the support of Saudi Arabia’s royal family may be contemplating his own bombing campaign against Iran.