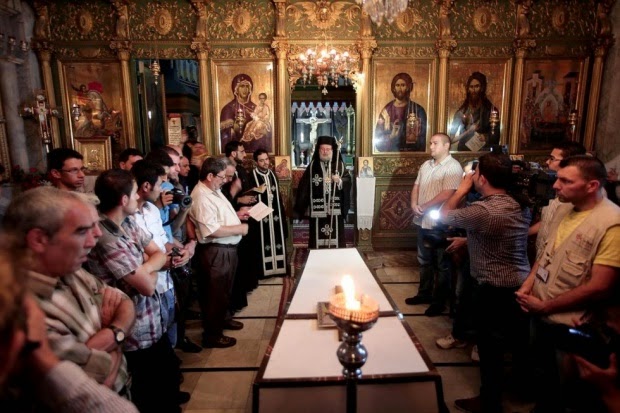 Solidarity between the Christian minority and Muslim majority is growing in Gaza as both suffer under the Israeli offensive, with churches sheltering all religions and prayers being offered up on all sides. A memorial service was held on Sunday for Ayyad at Porphyrius Greek Orthodox Church on Sunday. The church has become a haven not just for Christian but also hundreds of Muslim families seeking shelter there as the offensive drags on.
“The church has been our hosts for the past two weeks, offering food, clothes and whatever we needed, their loss is our loss, their pain is our pain,” says 45-year-old Abu Khaled.
At the memorial service for Jalila, Archbishop Alexios said: “Another human being, an innocent one, has lost her life." In the pews, crowds of Palestinian Christians sobbed as first from their tiny minority to be killed in the conflict was laid to rest.
In something that surprised local journalists, Jalila’s body was carried by both Muslims and Christians to the grave. It seems the shared wounds, mourning and rage are bridging past divides in war-ravaged Gaza.
Last week, Gaza’s Greek Orthodox Church also sustained damage by Israeli artillery shelling. Fifteen graves were damaged and damage was also caused to the Church’s sole hearse, says Kamel Ayyad, a parish member.
“The world must realise that Israel’s missiles don’t differentiate between Christians and Muslims,” said Abu.
At the memorial service a sad young man surrounded by attendees dressed in black gave a speech on behalf of the Greek Orthodox community and questioned the position of the international community in dealing with Israel’s crimes.
“Here is a Palestinian, an Arab, a Christian woman, martyred by Israeli shelling,” he said. “Bombs slammed into us and killed without differentiating between civilians and combatants,” he adds. Christians and Muslims both helped to carry the coffin to the grave (AA)
Father Manuel Musallam, a former priest of the Latin Church, has always been an advocate for Palestinian unity.
“When they destroy your mosques, call your prayers from our churches”.
There are approximately 1,500 Christians in Gaza. Mosques stand next to churches along the thin coastal enclave. George Ayyad, a relative of Jalila, rejects the idea that Christians will leave Gaza after this incident.
“This is exactly what the Israelis want, but where should we go?” he questions, before he continues “This is my homeland and we are Christians here in Gaza for more than 1,000 years and we will remain.”
During the memorial, bible scriptures were recited before Ayyad’s body was carried out and placed in a simple white coffin that had been decorated with a black cross.
Homeless Christians and Muslims brought out her remains together in the same community where Jalila will be buried, in the town she was born: in Gaza.
A Virgin Mary icon was placed in Jalila’s coffin while her relatives sang “Hallelujah.”