The macabre truth is that Israeli life is deemed by the western media to be worth more than a Palestinian life – this is the hierarchy of death at work. 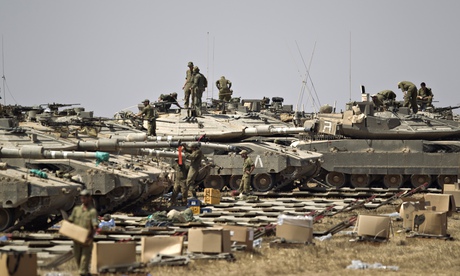 Israeli soldiers and tanks near the border with the Gaza Strip this week. Photograph: Ariel Schalit/AP

"Israel under renewed Hamas attack": this was last night's BBC headline on the escalating bloodshed in Gaza. It is as perverse as Mike Tyson punching a toddler, followed by a headline claiming that the child spat at him. As Elizabeth Tsurkov, a Tel Aviv-based Israeli human rights activist, tweeted: "We are targeted by mostly shitty rockets. Gazans are being shelled with heavy bombs. We have shelters, sirens, Iron Dome. They have 0."

There is no defence for Hamas firing rockets into civilian areas, and as sirens wail in Israel, the fear among ordinary Israelis should not be ignored or belittled. But the media coverage hardly reflects the reality: a military superpower armed with F-15 fighter jets, AH-64 Apache helicopters, Delilah missiles, IAI Heron-1 drones and Jericho II missiles (and nuclear bombs, for that matter), versus what David Cameron describes as a "prison camp" firing almost entirely ineffective missiles. Twenty-seven Palestinians are reported to have died in Gaza – and, mercifully, no Israelis have been killed by Hamas rockets – and yet the BBC opts for the Orwellian "Israel under renewed Hamas attack".

The macabre truth is that Israeli life is deemed by the western media to be worth more than a Palestinian life: here is the "hierarchy of death" at work. According to the Israeli human rights organisation B'Tselem, 565 Palestinians have been killed by Israeli security forces since January 2009, while 28 Israeli civilians and 10 Israeli security personnel have been killed. The asymmetry of this so-called conflict is reflected in the death toll, but it is not reflected in the coverage.

And so it goes for the events surrounding the abduction and vile murder of three Israeli teenagers. What was not widely reported by the western media was that – in the raids that followed their disappearance – six Palestinians, including a child, were killed by Israeli forces in the West Bank. As Amnesty International put it, these were "blatant violations of international humanitarian and human rights law".

Perhaps our media will excuse themselves on the basis of motive: whoever killed the three teenagers intended to do so, while Israel only kills civilians unintentionally. Read, then, the report of Human Rights Watch, not an organisation that can be accused of being a den of lefties. Israel's actions "amounted to collective punishment", it declared, because of "unlawful use of force, arbitrary arrests, and illegal home demolitions". Human Rights Watch investigated two deaths and found "there was no evidence that the victim or anyone in the line of fire posed an imminent threat to Israeli soldiers or others". On 17 June, 20-year-old Ahmed Samada was shot dead in Jalazon refugee camp, and yet Israel did not even claim to have come under fire; the same for 17-year-old Sakher Abu Aal-Hasan, shot dead on 21 June.

The BBC is a public broadcaster, duty-bound to provide balanced reports that accurately reflect the reality on the ground. It is failing to do so, and it is up to licence payers – to whom it is accountable – to demand that it does.