Donald Trump has invited Benjamin Netanyahu to meet him in the US “at the first opportunity” as the President-elect seeks to gather international allies.

The Israeli Prime Minster’s office said the pair spoke by telephone after the President-elect’s shock victory on Wednesday.

“Prime Minister Netanyahu congratulated President-elect Trump on his victory and told him that the United States has no better ally than Israel,” a spokesperson said. 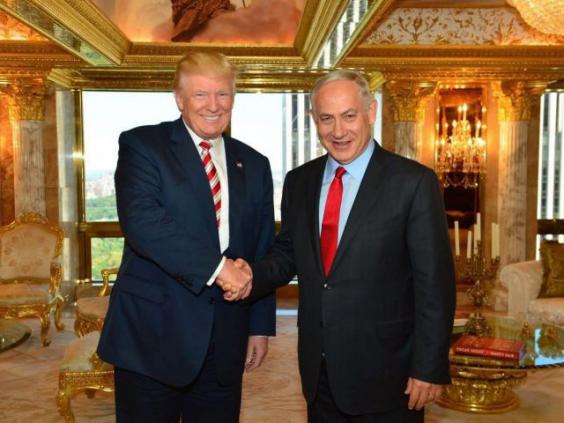 While Israel calls Jerusalem its capital, few other countries accept that, including the United States (EPA)

“The two leaders, who have known each other for many years, had a warm and heartfelt conversation.

“President-elect Trump invited Prime Minister Netanyahu to a meeting in the United States at the first opportunity.

“Prime Minister Netanyahu told President-elect Trump that both he and his wife Sara are looking forward to meeting him and his wife Melania.”

Mr Netanyahu congratulated Mr Trump, calling him a “true friend of Israel” and saying he looked forward to working together.

“The ironclad bond between the United States and Israel is rooted in shared values, buttressed by shared interests and driven by a shared destiny,” he added.

“I am confident that President-elect Trump and I will continue to strengthen the unique alliance between our two countries and bring it to ever greater heights.”

He met both the Republican candidate and Hillary Clinton in September, when Mr Trump said he would recognise Jerusalem as Israel’s capital, angering Palestinians who also regard the holy city as their own.

Following the election Mr Netanyahu also phoned the former Secretary of State and “thanked her for supporting Israel”, extending an open invitation to the country.

The two countries are strong allies, with the US confirming a $38 billion (£30 billion) military aid package earlier this year.

But tensions frequently rose with Barack Obama’s administration over Israeli concerns over the Iran deal and the President’s objections to thecontinued construction of settlements in the West Bank that are regarded as illegal under international law.

The disputes came amid a continuing wave of violence in Israel and the Occupied Palestinian Territories, seeing around 40 Israelis and foreign nationals killed in Palestinian attacks and more than 230 Palestinians shot dead by security forces over the past year.

Right-wing Israelis and politicians have welcomed Mr Trump’s victory, with education minister Naftali Bennett claiming his presidency would be an “opportunity for Israel to immediately retract the notion of a Palestinian state in the centre of the country, which would hurt our security and just cause”.

The US has so far joined the vast majority of Western nations including the UK in supporting a two-state solution but Mr Trump’s advisor on Israel previously said the candidate was “tremendously sceptical” of the policy.

“A Trump administration will never pressure Israel into a two-state solution or any other solution that is against the wishes of the Israeli people,” David Friedman told a Trump rally in Jerusalem in October.

Mr Friedman also told the AFP news agency Mr Trump does not see Jewish settlements in the occupied West Bank as illegal, as nearly all the rest of the international community does

Mahmoud Abbas, the Palestinian President, has congratulated the President-elect and said he hoped peace could be achieved during his term based on the borders of 1967, the year Israel occupied the West Bank.