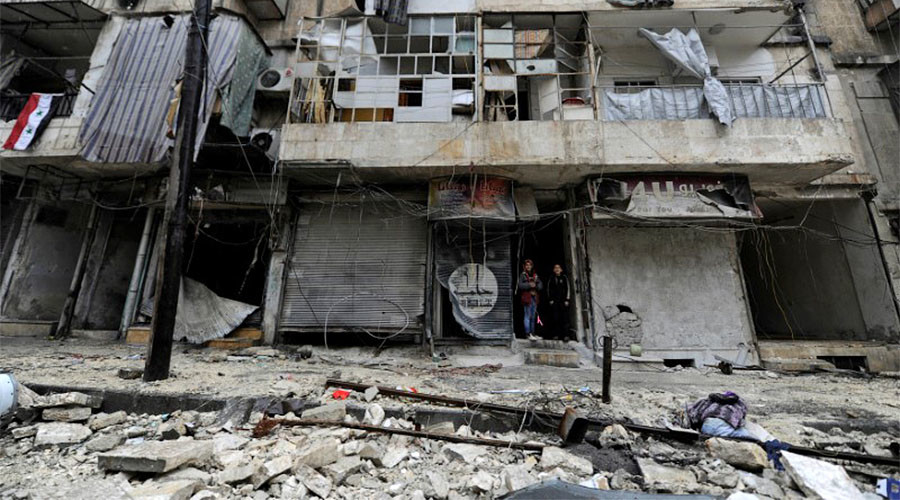 Western mainstream media’s coverage of the Syrian war is “compromised” as their local sources are “not credible” and, in the case of Aleppo, not even there, a Canadian journalist said in an emotional speech at the UN.

“I’ve been many times to Homs, to Maaloula, to Latakia and Tartus [in Syria] and again, Aleppo, four times. And people’s support of their government is absolutely true. Whatever you hear in the corporate media is completely opposite,” Eva Bartlett, a Canadian journalist and rights activist, told a press conference arranged by the Syrian mission to the UN.

“And, on that note, what you hear in the corporate media, and I will name them – BBC, Guardian, the New York Times etc. – on Aleppo is also the opposite of reality,” she added. The mainstream media narrative, she argued, is meant to mislead the public about what is really happening in Syria by demonizing President Bashar Assad’s government and altering the facts on Russia’s support for Damascus.

Bartlett’s statements did not seemingly play well with everyone in the room. A reporter from Aftenposten, Norway’s largest print newspaper, challenged her and demanded Bartlett explain what she thought was the “agenda” of Western mainstream media. “Why should we lie, why the international organizations on the ground should lie? How can you justify calling all of us liars?” he said.

Bartlett, who has been covering Syrian events for several years since the outbreak of the civil war, noted that while there are “certainly honest journalists among the very compromised establishment media,” many respected media agencies simply seem to avoid doing a fact-check.

She then asked her Norwegian colleague to name humanitarian organizations operating in eastern Aleppo. As the Aftenposten reporter stayed silent, Bartlett added that “there are none.”

Members of the controversial group “purport to be rescuing civilians in eastern Aleppo and Idlib … no one in eastern Aleppo has heard of them.” Meanwhile, she noted, “their video footage actually contains children that have been ‘recycled’ in different reports; so you can find a girl named Aya who turns up in a report in say August, and she turns up in the next month in two different locations.”

A journalist from Italian newspaper Corriere della Sera took a more measured tone and asked Bartlett to explain the difference between the Western and Russian media coverage, saying that Russian television channels report on humanitarian efforts and reconciliation instead of overt naming and blaming.

“You ask why we aren't seeing this,” Bartlett said. “This relates to the other gentleman's question about why most of the corporate media are telling lies about Syria. It's because this is the agenda; if they had told the truth about Syria from the beginning, we wouldn't be here now. We wouldn't have seen so many people killed.”